Surely that title has piqued your interest? Well, it’s been stolen from an essay by Charmian Clift, and from the statement – ‘Nothing worth knowing ever happens beyond the distance of a mule ride’ – which was more than likely relayed to Clift during the 12 or so years she lived on the Greek Islands, first Kalymnos then Hydra, with her husband George Johnston and their three kids. 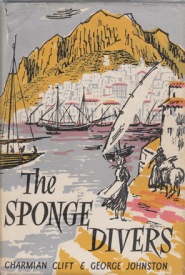 In searching around for a title for this post (which is the first for 2014 and therefore should carry some weight), I wanted to avoid the usual clichés about the new year, and either how crap it all is, or how great, depending on which side of the fence you’re sitting on. And I’ve been reading a hell of a lot of Clift and Johnston, with my stash of secondhand copies of their novels and biographies growing almost weekly. Is this an unhealthy obsession with the past, or an attempt to establish some continuity in the present? (Or possibly an avoidance of that more pressing tome, recently arrived in the mail, Four Degrees of Global Warming: Australia in a hot world.)

While not entirely sold on what the old man says to Charmian, as I care a lot about what’s happening to our friends in the gas and coal fields of Queensland, the Northern Rivers, and in Fukushima, and in a lot of other places besides, I also get the point, I think. That is, humans only have so much fight in them, and that energy needs to be conserved. But I could definitely ride a mule to Queensland, although it might take me awhile and I’d be very saddle sore. How far you can ride a mule, then, is much like the answer to that old conundrum – how long is a piece of string? It’s entirely subjective, and depends largely on how used you are to riding mules. 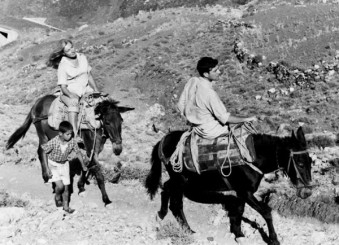 And here’s something that few will know (unless you’re a Clift/Johnston tragic like me) – the young Leonard Cohen stayed on Hydra in the early 1960s and ended up at parties at the Clift/Johnston house (which was the scene of many such gatherings over the years, as they were amongst the few permanent ex-pats on the island). And Cohen definitely rode a mule when he was there, because I stumbled across the above photo from that time. 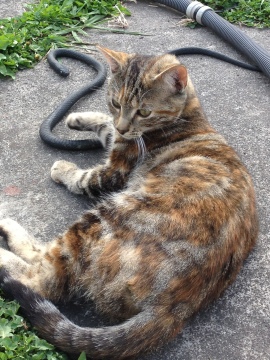 This is actually a post about new year’s resolutions, or the lack of them, or making resolutions that mean something, or don’t, or that at least make some sense within your personal mule-riding capabilities. And it was inspired by some resolutions sent to me by one of my few email correspondents (as in, most of my ‘correspondence’ takes place via Facebook or Twitter or SMS – not even in letters these days, which is a sad indictment, although I did write one to my Dad the other day and my handwriting wasn’t all that bad, if I say so myself). Reading my friend’s resolutions, I started thinking about some resolutions I could make that I might have some chance of fulfilling. One that came to mind is, ‘Take less photos of the cat and more of the children’. Another could be, ‘Don’t let the cat play with plastic snakes, in case you move to the country one day’. Although cats once guarded the Egyptian temples and kept themselves busy by killing snakes, or so I’ve been told.

Anyway, I hope you get a laugh (and some inspiration) out of this list of resolutions that was sent to me, as I did. I particularly agree with the bit about the wine. Oh, and the aircraft. And the bit about dogs … But that one about the cars … it’s a guy thing I guess.

“I take my new New Year’s resolutions very seriously. Developing them has always been an onerous task requiring much thought and wine. Obviously it is important that any resolution should not over strain one’s character, and each and every one should be readily able to be quickly and easily put into effect.

What is the point after all of coming up with a list of things that even St Thomas Aquinas or Sir Ernest Shackleton, or others of that ilk, could not have managed to comply with? There is indubitably a limit to what we, as naked apes, can actually carry out in the way of personal change (or even world change). ‘Aim low’ is my motto.

By way of bringing this post full circle, on Christmas Day night, as the fire and the evening drew to a close, my neighbour Robynann and I struck up a fierce debate about Charmian Clift and George Johnston. Robynann weighed in with the statement that George’s behaviour was responsible for Charmian’s suicide, or something to that effect. I demurred, saying that I thought it was more complicated than that. But that’s another story. What Robynann did tell me, which I didn’t know, and because she has a head full of this kind of information, is that the song, ‘So Long Marianne’ was written about the time Leonard Cohen was on Hydra, and his ‘romance’ with Marianne C. Stang Jensen Ihlen (in the photo above, with the mules). And funnily enough, this is my all time favourite Leonard Cohen song.

The beautiful feature image is by Trisha Dixon Burkitt, who runs literary/photographic tours of Hydra.

2 thoughts on “How Far Can You Ride A Mule?”