To make 15 x 250ml jars of marmalade you’ll need approximately three kilos of fruit, so I’ve used about a kilo each of oranges, ruby grapefruit and lemons (homegrown). I thought using ruby grapefruit would make the marmalade extra special, which, in fact, it did. (You can adapt this recipe to any combination of fruit, or make a single fruit batch.)

You’ll also need about 4kgs of white sugar and a packet of pectin (just in case). Natural pectin, if you use it, is by far the best, such as apple pectin from a organic wholefoods shop. 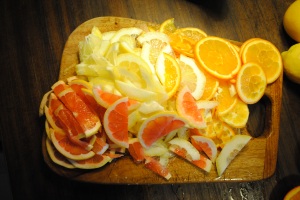 Slice all the fruit finely, as above, cutting off any brown marks on the skin, and then halve and halve again. You can remove a few of the seeds but these help with pectin production and can be skimmed off at the end, as they float to the surface. 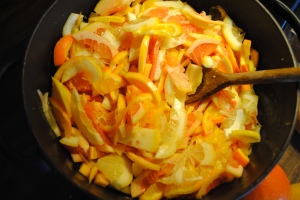 Put all of the fruit, with as much of the juice as possible, into a large, heavy-based saucepan and mix. Cover the fruit with cold water* and bring to the boil, then simmer for about an hour and a half, stirring regularly to make sure the fruit doesn’t stick. You should end up with a mixture that looks like the picture below. (*Just cover the fruit with the water, as it produces its own juice when cooking; too much water equals runny marmalade.) 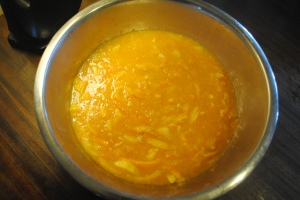 Measure out the fruit mixture in cups, as you need to add 1 cup of sugar for each cup of fruit. Put the fruit back on the stove, add in the sugar and stir it through. Bring the mixture to a boil, again stirring regularly to avoid the fruit catching. I use one of those old-fashioned (once were asbestos) mats to help to avoid burning any of my preserves or chutneys.

While the marmalade is cooking, heat the oven to 150 degrees Celsius, leaving the jars in the oven for at least 5 minutes to sterilise them. Sterilise the lids in a bowl of boiling water.

I have never used a sugar thermometer to test for setting point, and so far, so good. Instead, I test for pectin by putting a couple of china saucers in the freezer for about two minutes, until chilled. Then, after the marmalade has boiled for about half an hour, put a small amount of the mixture on a saucer and put it back in the freezer for another minute or two. Once chilled, push the mixture with your finger; if it wrinkles, you have pectin and the marmalade is ready. If too thin, boil it for a bit longer and test again. (If your quantities are right, you shouldn’t need to add pectin, as citrus is so naturally full of it. BUT, if you have ended up with marmalade that won’t set, add about 50g of pectin and everything should be fine.)

Pour the marmalade (using a jug or equivalent) into the hot jars, gently wipe the lip with a clean damp cloth, and put the lids on, tightly. You’ll need to use a tea-towel or cloth to handle the jars, as they’ll be very hot. 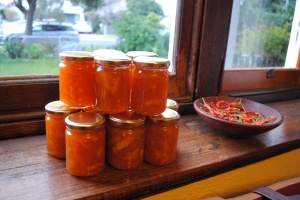 And there you have it; fifteen or so jars of three fruits marmalade.