As this was the first time I had made a genuine pickling brine, as opposed to using water and salt and then bottling in olive oil to preserve, I thought that a bit of web research was necessary.

Essentially, I was looking for commonalities amongst ingredients and technique and then applying them to what I thought would best suit my Jalapenos.

The almost universal rule seemed to use a 50/50 solution of water and vinegar. Any vinegar except balsamic would be applicable. So that was easy.

Next step was to work out the ratio of salt and sugar, and this varied. Some recipes had more sugar and less salt by ratio or vice versa. I decided on a tablespoon of each per four cups of solution.

The list of additives came next and this could pretty much be summed up by ‘anything you want’ so, as I was pickling chillies, I thought about curry or Mexican ingredients. I chose marjoram as the herb because I couldn’t see thyme or rosemary in the flavours and a few recipes had mentioned it.

So here is the recipe, untasted as yet but I suppose experimenting with this stuff is half the fun.

Combine everything in a saucepan and bring to the boil. Allow to simmer for 20-30 minutes and leave to cool. When warm to the touch, pour the brine over the chillies (in your sterilised jar) to cover. 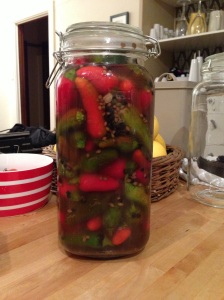 The feature image is a photo of Russell and Lisa’s beautiful & productive garden in Melbourne’s northern suburbs.