Let’s not mention the war. No, I will mention it. It’s nearly a year since The Buzz began, and I’ve been absent without leave. Bad blogger. Yet it took a few weeks and a lot of sitting around stressing about how much needed to be done; bemoaning the terrible weather and wishing I was back in the sunny northern hemisphere … And then I just got stuck into all those things that needed to be done, and once I started I couldn’t stop. So this post returns to the theme of an earlier post – the ongoing battle against the dark forces of grass, and the triumph of the forces of food production. 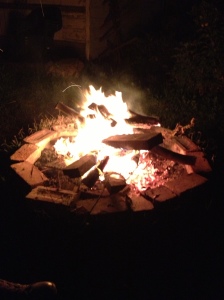 When we moved into this house, over three years ago, we immediately built a brick fireplace in the south-west corner, on top of the spot where the previous tenants had dug a hole for a trampoline and then roughly filled it in again. As a result, and since the rainy winters began, the area around the fire became a mud puddle, conducive to neither social occasions nor my aesthetic. Needless to say, the persistent gatherings around the fire made matters worse. We resolved to dig up the area, add gypsum to break up the Merri Creek clay, level out the land, sow grass and reinstall the fireplace. But as they say, the best laid plans … 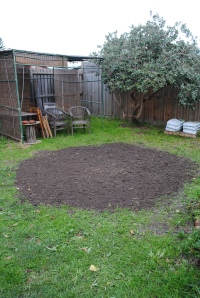 The Handy Guy got down to work, as you can see in the photo to the right. This took an afternoon of hard labour and, once the area was level, the gypsum dug through and most of the clumps of couch removed (my arch nemesis), we began to think. Sowing grass seemed such a waste of prime agricultural land; the position was ideal for growing veges all year ’round, getting both winter and summer sun (but not too much of the latter, as it’s shaded by the Feijoa in the afternoons). And of course we still had all those bricks …

A few neighbours gathered around, a bit perturbed by the loss of the fireplace and the clearly audible mutterings about new garden beds. But the promise of more space, more food and less grass was just too powerful. We made a new resolve – tomorrow (now yesterday) we would turn the area into a garden bed. Already my thoughts were full of the things I could grow. The Diggers Seed Annual was bedtime reading. A long mental list was made.

First thing Sunday morning I got to work, setting out the bricks around the new patch. Not usually a geometric soul, I became very pernickety about my circle, although The Handy Guy commented that it was ‘slightly egg-shaped’. I also raked through the soil again, removing any remnants of couch I could find. Seriously, the stuff is harder to get rid of than Glenn Close in Fatal Attraction and will grow back from a mere bundle of roots. And we weren’t using a hessian weed mat this time, as we wanted to take advantage of all the lovely potash in the soil, the remnant of three years’ worth of fires. 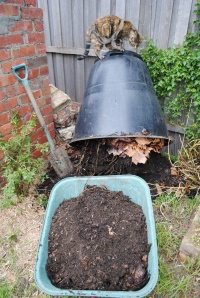 I then added four loads of compost from the black bin, which had been decomposing for about five months, and doing very well in spite of the lack of warmth. While the elm leaves on top weren’t decomposed (unless you chop them up, they can take a long time), underneath was lots of beautiful dirt (and perhaps some mice). The elm leaves have now dropped to the bottom and we’ll start using this bin for food scraps, letting the other (now full) bin do its thing, in readiness for the summer garden. Once I’d added the compost to the garden bed, I sprinkled on some lime, more potash and blood and bone. Then I spread the cow manure – bags and bags of the stuff – over the top.

In The War On Grass (Part 1), I talked about how easy it is, when you make a concerted effort, to eradicate grass and create more space for growing food. The area under the fruit trees, which was the target of the last attack, is now in its second season and consolidating. I’ve sown at least 100 garlic cloves, with the intent of providing us with enough garlic for a year. I’ve moved the rhubarb and artichokes (yet again), and both are doing well.

A part of my renewal of interest in the garden, which arrived along with a glimpse of sun, was building a ‘path to nowhere’, to access the artichokes and garlic. Like an ancient trading route, the cat had marked out a track through the plants, and that was where I laid the bricks.

Below is a shot of the orange tree, replete with the best crop of oranges thus far. This is at least partially due to my many, many bee friends and the strategic positioning of that wonder plant – borage – throughout the spring, when citrus flowers need pollination. One of the tasks on that lengthy list of ‘things to do’ is make Three Fruits Marmalade from our own oranges, lemons and mandarins, all of which are in bountiful supply this year. Lemon cordial is also on that list, along with Rhubarb & Orange Jam – a recipe I’ve promised for a long time, which will appear in the next week or so.

But enough of reminiscing. Here’s the new garden bed we built yesterday, with a layer of sugar cane mulch over the manure and compost, to keep the worms damp and happy, and adding extra good stuff as the mulch breaks down. I’ve planted a lavender bush in the middle, as a companion plant to draw the bees, and I’ll add other blooms as time

wends on. Whilst I initially envisaged a bed cut into thirds like a pie, The Handy Guy pointed out that I’d created a Mercedes Benz symbol, and we can’t be having that. Son Max had already suggested we divide the bed in the shape of Yin & Yang, so I’ve decided to implement his idea. I’ll post a photo when it’s done, possibly this afternoon.

It’s amazing how a few days of hard physical labour and the creation of something beautiful and functional can cheer you up. My limbs might be sore and tired, but my gardener’s mind is ticking over: What’ll grow well in the new bed? When can I start planting do you reckon? How does this alter my overall rotational plan? Can we squeeze in a visit to the new Diggers Shop at Cloudehill this school holidays? The possibilities are endless, or so it seems at this particular juncture.

Below are some photos of the garden in its nascent winter glory. Last winter I was feeling impatient around now, a sensation expressed in my inaugural post, The Waiting Game. This winter I’ve got too much to do to sit around waiting. Three weeks away and then two of inaction have caused an immense backlog in the garden. I’m slowly ticking things off that list, and at the same time adding more. I’ll keep you posted … 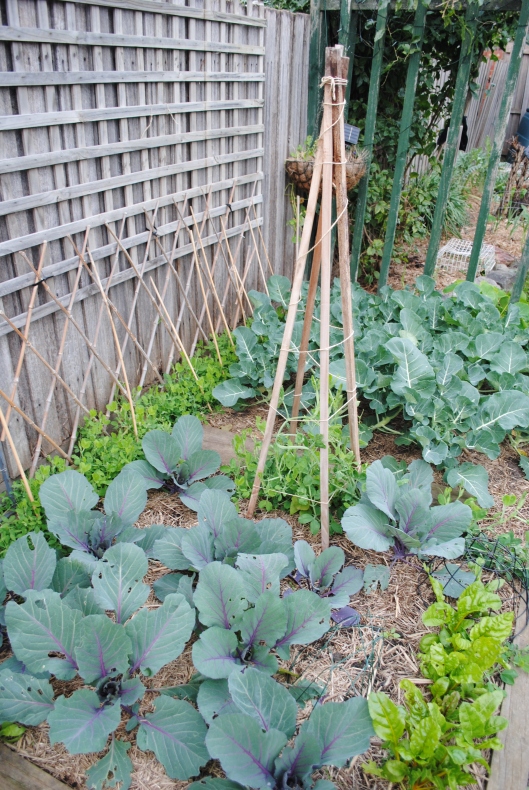 Red cabbage, rainbow chard, broccoli, sweet peas. The tripod is nurturing my sweet potato sprouts from last summer’s crop, in preparation for an even bigger harvest next year. 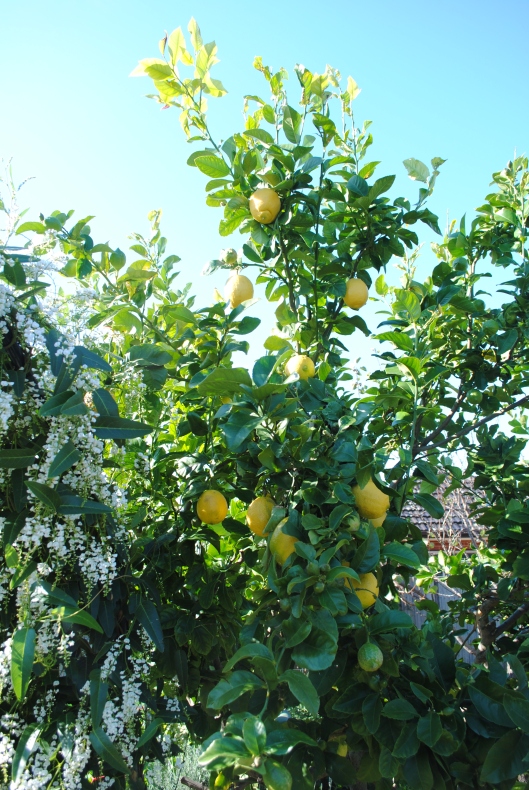 The lemon tree with the white Hardenbergia taking over the trellis, attracting bees and looking beautiful. The Hardenbergia also appears in the feature image.

P.S. Thanks to my new followers and friends from Turkey, Sweden and Denmark, amongst others. And, of course, thanks to all my very patient followers from the past year. I resolve to be a better blogger from now on. One post a week, without fail.