April slipped away and segued to mid-May, and it’s been a long time between posts. Tonight, as it’s budget night, most Australians will be glued to their televisions, watching as dollar signs issue from the mouth of the so-called Treasurer, at the behest of the so-called Prime Minister. And I say ‘so-called’ because I have recently dubbed the current PM ‘The Pretender’, and I’m sticking with it. The original term ‘pretender’ comes from the Latin praetendo and then the French ‘pretendre’, and it wasn’t considered a pejorative. But I am using it in the latter sense, and incorrectly no doubt (although the imperialist overtones somewhat suit the person I’m referring to), to signify in the strongest possible manner that I consider the Prime Minister and Government of Australia to be false. And it’s not just this current manifestation that is falsely (illegally) installed in the highest offices of the land, but the pack of them, going right back to the first federal government in 1901, and before that, to the governing bodies of the separate ‘colonies’. (And if anyone thinks The Redhead was any better than The Pretender, well you’re living in The Land of Oz.)

A week or so ago I was re-reading Captain Corelli’s Mandolin, by Louis de Bernières, marveling at the machinations behind the Second World War, at the stoicism of the Greeks in the face of betrayal, invasion, occupation; a pattern that had become established as far back as Napoleonic times, if not before. But then, I guess the Greeks invented stoicism, so their ability to survive such horrific events is deeply embedded in the collective psyche. The fact that I snatched the book back out of the garage sale pile and re-read it when I did struck me as timely on a number of fronts. Firstly, for anyone who reads my posts regularly, you’ll know that I have a fascination with the Greek Isles, in particular with the Australian ex-pat writers, Charmian Clift and George Johnston, who lived on Hydra for nine years. 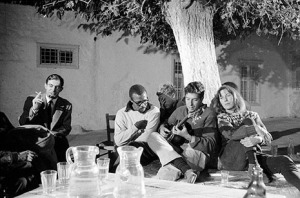 I often find that their perspective on return to Australia in the early 1960s cuts to the quick of many of the cultural and social issues we are experiencing in the present, which inevitably conjures up a sensation of disappointment; of time on a recurring loop. Australians could do well in re-visiting the philosophy of stoicism; it was/is ‘our’ complacency and materialism that so frustrated Clift, who had lived amongst people with very little in terms of possessions but who had a lot in terms of a sense of community. Poignantly, for me anyway, Captain Corelli’s Mandolin ends at the historical point that Clift and Johnston, amongst many other ex-pats and tourists from all over the world, escape to the Greek Islands. In the novel, this new phase in Greece’s history is subtlely cast as yet one more invasion and occupation.

Another reason I found Captain Corelli’s Mandolin painfully relevant lies in de Bernières’ sizzling descriptions of Mussolini; a short and ugly man, in physique as well as spirit, who sacrificed his people like livestock in his pursuit of absolute power. This would inevitably call up images of all number of leaders of ‘the free world’, Australia’s Pretender amongst them. And Mussolini was arguably a Pretender too, a status that de Bernières captures beautifully in Chapter 2, ‘The Duce’. 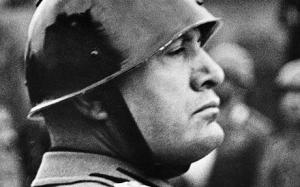 Jeremy Paxman, who I confess to admiring, describes the passage as follows: ‘Chapter two is an uninterrupted diatribe by Mussolini – a splendid debunking of the fascist egomaniac. I found it one of the funniest sections of the book.’ Chapter 35, entitled ‘A Pamphlet Distributed on the Island, Entitled with the Fascist Slogan ‘Believe, Fight, and Obey’, is funny and disturbing in equal parts. It ‘reproduces’ an anti-Mussolini leaflet that suddenly appears on Cephalonia, the Italian-occupied Greek Island that is the subject of the novel, and is an uninterrupted diatribe about Il Duce, exposing his lies, contradictions, hypocrisy and acts of extreme violence and aggression. ‘He has (and who are we to disagree?) declared Himself greater than Aristotle, Kant, Aquinas, Dante, Michelangelo, Washington, Lincoln, and Bonaparte, and He has appointed ministers to serve Him who are all sycophants, renegades, racketeers, placemen and shorter than He is.’

The title of this post – ‘Death By A Thousand Cuts’ – is not a reference to the capitalist/corporate magic show taking place on Australian television this evening, but rather taps into another meaning of the phrase: it refers to ‘creeping normality, the way a major negative change, which happens slowly in many unnoticed increments, is not perceived as objectionable’. Often, I would add, when the major negative change is finally perceived, it is not until it is too late. In his article, ‘Easter’s End’, published in 1995, Jared Diamond invoked the notion of creeping normality as an explanation for the disappearance of the former (pre-colonial) Polynesian society on Easter Island.

‘As we try to imagine the decline of Easter’s civilisation, we ask ourselves, Why didn’t they look around, realise what they were doing, and stop before it was too late? What were they thinking when they cut down the last palm tree?’ As far as metaphors for the contemporary state of affairs go, this is a fairly good one. Diamond is consciously and incisively, through detailed scientific, anthropological and historical research, asking the same question of our ‘civilisation’. He writes: ‘By now the meaning of Easter Island for us should be chillingly obvious. Easter Island is Earth writ small. Today, again, a rising population confronts shrinking resources. We too have no emigration valve, because all human societies are linked by international transport, and we can no more escape into space than the Easter Islanders could flee into the ocean. If we continue to follow our present course, we shall have exhausted the world’s major fisheries, tropical rain forests, fossil fuels, and much of our soil by the time my sons reach my current age.’ If the situation wasn’t so dire, I’d be tempted to yell out, ‘Bingo!’ But it is dire, and depressing, and for many it is appearing more and more like a zero-sum game.

Creeping normality is something that has applied and continues to apply to Australia in very specific ways. The Anglo and immigrant population of Australia is only just now beginning to notice that something has been chugging along behind the scenes of our relative wealth and comfort – that is, the very condition of that wealth and comfort – which is a bit on the nose, so to speak. Recently the federal Greens called for the introduction of a national equivalent to the NSW Independent Commission Against Corruption (ICAC), following the revelations of the institutionalised corruption that is rife throughout every level of NSW politics. I’d hazard that most people weren’t so much surprised by ICAC’s discoveries as relieved: our suspicions have now been justified and we have an extra degree of leverage in the fight against the mining corporations and the politicians who represent them.

On the other hand, we know this is only the tip of the iceberg, and that this kind of corruption is endemic to Australian politics at large, and has been for a long time, and hence the Greens’ call for the formation of a national body, although they’ll need the best of luck in the face of The Pretender and his ilk. More’s to the point, we shouldn’t be surprised or shocked at, or even disappointed in the corruption and criminality that is at the core of Australian political life. Robert Thorpe, a long time Aboriginal activist, puts it best in his comment on The Greens’ post about ICAC on Facebook: ‘Without a proper legal foundation “Australia” will remain a corrupt, racist and criminal colony of Britain. Corrupt, fraudulent, deceitful legal foundations don’t help the cause of anti corruption. Australia itself is a crime scene unresolved! Legal, moral and ethical government in this country begins with treaty!’

Interestingly, Jared Diamond’s 2012 book, The World Until Yesterday, looked at what the western world could learn from Indigenous societies in terms of how they dealt with universal human issues, ‘our’ relationship to the environment being one of these. Many might say that corruption is endemic to humanity, but I don’t think so. The vast quantity of good people out there contradicts this notion; rather, it is wealth that seems to corrupt, and the power that goes along with wealth in a capitalist society. What other possible explanation is there for the apocalyptic greed that characterises the global corporate/capitalist system? Diamond writes in ‘Easter’s End’: ‘With the risk of nuclear war receding, the threat of our ending with a bang no longer has a chance of galvanizing us to halt our course. Our risk now is of winding down, slowly, in a whimper. Corrective action is blocked by vested interests, by well-intentioned political and business leaders, and by their electorates, all of whom are perfectly correct in not noticing big changes from year to year. Instead, each year there are just somewhat more people, and somewhat fewer resources, on Earth.’

While I would question Diamond’s faith in ‘well-intentioned political and business leaders’, he’s 100% accurate in terms of the electorate. Non-Indigenous Australians have been asleep at the wheel; we’re only now waking up to the nightmare of a country that has been sold off to the highest bidder, where the beauty that is the natural environment is no longer something we can take for granted – in a few short years it will be covered end-to-end in gas wells. We’ll fight it, of course, but does the fact that we have allowed this to happen, right under our comfortable and sometimes slightly superior noses, mean that it’s too little, too late?

There’s a saying – that you get the government you deserve. Perhaps, by dint of our complacency, our refusal to look closely at and make recompense for the crimes of the past, by turning a blind eye to continuing institutionalised racism in the form of stolen children, deaths in custody, the ‘Intervention’, etc, etc, we have normalised the corruption that we now publicly claim to find so abhorrent? And, as a result, maybe we deserve the ugly, mean-spirited Pretender we have as Prime Minister.

In 1995, Jared Diamond still held out hope for the world, concluding his article with the words: ‘It would be easy to close our eyes or to give up in despair. If mere thousands of Easter Islanders with only stone tools and their own muscle power sufficed to destroy their society, how can billions of people with metal tools and machine power fail to do worse? But there is one crucial difference. The Easter Islanders had no books and no histories of other doomed societies. Unlike the Easter Islanders, we have histories of the past – information that can save us. My main hope for my sons’ generation is that we may now choose to learn from the fates of societies like Easter’s.’

I’m not sure I’m as optimistic as Diamond. ‘We’ don’t seem to have learnt much from the past thus far, as the similarities of 1950s and 60s Australian society to contemporary Australia would indicate. Similarly, we can read all about the devastation of the two world wars, and the many other wars since then; we have the knowledge at our disposal of the rise of the military/industrial complex; we have witnessed the wresting of self-determination away from nation-states and into the hands of bankers and corporations; we have climate science and medicine; and on and on it goes. Has this knowledge made us any wiser or less likely to be the engineers of our own destruction? I suppose in the end, as Diamond says, it is a choice we have to make, to learn from the past in order to create a better future.