After I had kids, people would say to me, but what about your creative pursuits – your writing and your art? My response was that my children and my garden were my artistic creations. I needed nothing more. Two strange human things, and plants; the latter were more predictable than the former. A garden is a painting, with a palette of living things. And it’s always changing; it’s more than a 3D painting. That’s why, although I can draw, and I’m okay at it, I would prefer a garden. I can also eat a lot of what I grow. Often I’ll remark upon a scene: ‘Monet could have painted that.’ Or, ‘Monet would appreciate this.’ Monet, who went blind but didn’t stop painting (the painterly equivalent to Beethoven I guess), and who created one of the most remarkable gardens still with us today.

So, on a day not unlike the past 12 hours (wet), but a good degree warmer, we ventured to The Garden of St Erth. It’s only an hour and a bit, if that, away from Melbourne, to be transported to another realm, and to return just that bit more healthier in mind because of it. In a previous post, The Art of the Garden at Heronswood, I talked a little about The Diggers Club and the venerable things they are doing in Australia, and in the longer and broader term for the world, in terms of preserving heritage seeds, gardens, beauty, in the face of a society (I used the word ‘culture’ but I removed it) bent on the destruction of such things. This year I had two Diggers’ tomatoes that went triffid-esque. I’ve just now saved their seeds and have written on the packets their genesis, ‘Diggers -2013’. 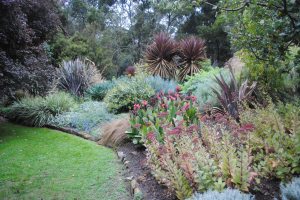 A couple of things you should know about this trip, before I resort to photographic evidence. Here in Melbourne we were in the middle of 48 hours of rain; most welcome, but a bit of a shock after a long, dry stretch. It was also the first week of school holidays. I was working on a book that recited endless details of aviation during the first world war, including the life and death of the ‘Red Baron’ and his exploits, so many times I wanted to throttle him (pointless). I am now an expert on early aviation, many times over – I needed to get out of this town. The second, more meaningful detail is that son Max had started knitting a scarf towards the end of last winter and now decided to finish it. His task: finish the scarf by the time we got there, or else. So, 20 minutes away from St Erth he is asking for instructions on casting off, which I give him from the front passenger seat while he looks over my shoulder. He finishes the scarf, after I huff and puff a bit, as my left brain is reluctantly called into action. 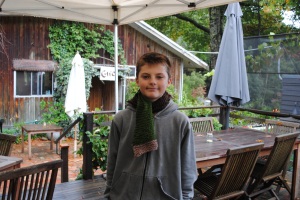 One thing about Max is, he focuses on a project, sets a deadline, and meets it. I’m very proud of my son (of my daughter Ruby too, of course, but she’s less ‘public’, so to speak, quite rightly for a teenage girl). He’s been wearing that scarf now since he finished it, even though we had some pretty mild days in the meantime. Bless him.

So we get to St Erth, where I have been wanting to go for such a long time, and it’s drizzly, and warm, and we’re hungry, so we eat, and there’s barely a soul around. And then I take the deep breath, as any tour of any garden throws my heart beat into over drive. 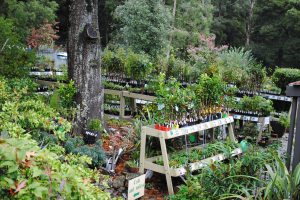 Then we go for a walk, in the slight drizzle, the green, the oxygenated air. Folk ponder the increase in mental illnesses in the contemporary world – find someone who works in a garden who isn’t happy and I’ll … well, I’ll make you a damn fine roast of your choice. (I’ve just realised that opens up another kettle of fish – the gardener who isn’t happy or the person who finds me a gardener who isn’t happy. And how do I send a roast in the post?)

Can I let St Erth speak for itself? I think I can. Here are the paintings from the day I was there, wet and drizzly and temperate as it was. Big pictures, so you can double-click on them and revel in the colour, the palette, the fine art that is a garden. 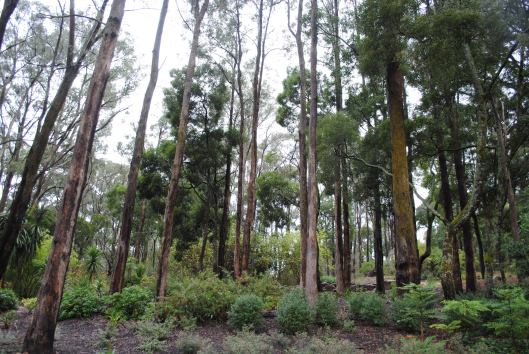 The bush garden: on this day, dripping with condensation such that the lichen on the south side of the trees gave you a sense of direction. 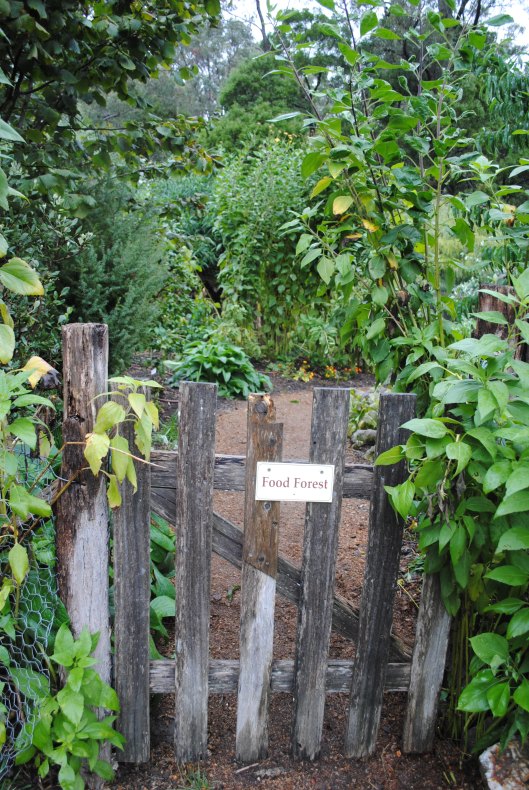 Can I entice you into the food forest, or the orchard? 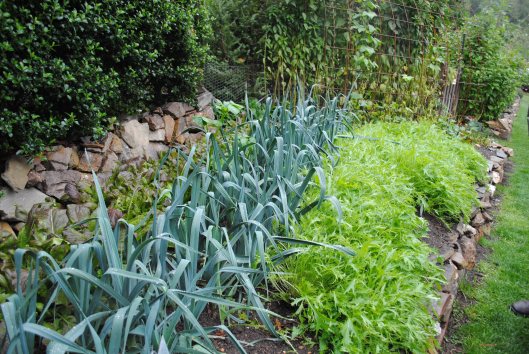 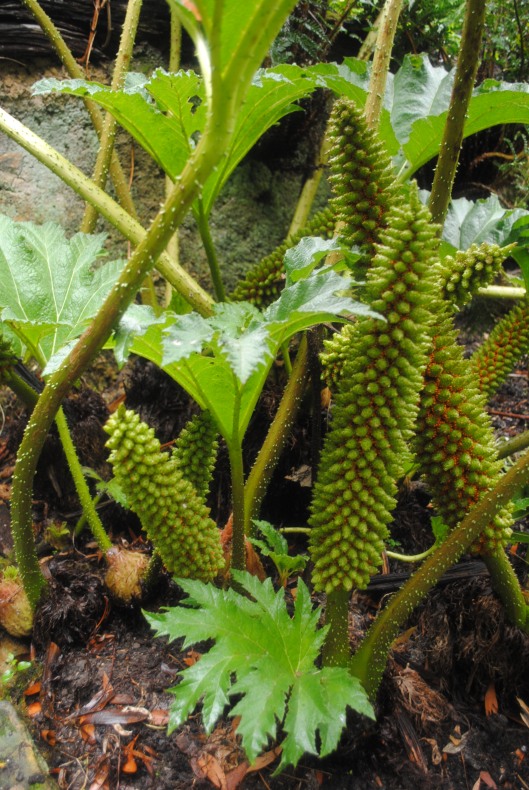 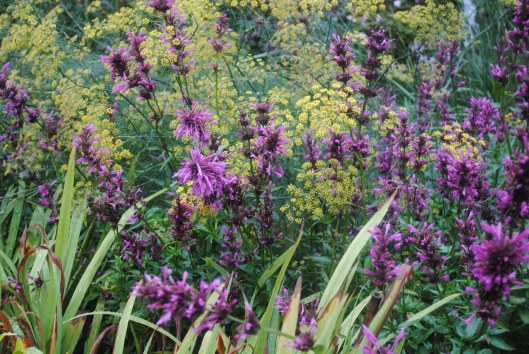 I have so many more remarkable photos of this most remarkable of gardens, set deep in the old goldfields, with a timeless, mongrel history that speaks wholeheartedly of those who were transported here (as though through time) and those who chose to live here, for a multitude of reasons. This, I believe, is not a time to judge, but to unite. I don’t like separatism; I never have. Recall that circle of ideology, where one extreme meets the other? I never wanted to be a part of that. 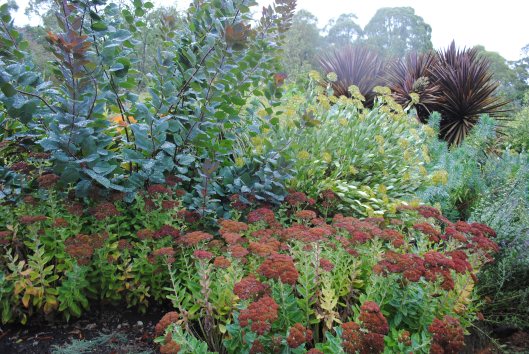 See. See how this garden is a timeless aesthetic? It escapes beyond the bounds of ideology, history and politics. It’s just a painting in natural pigments. 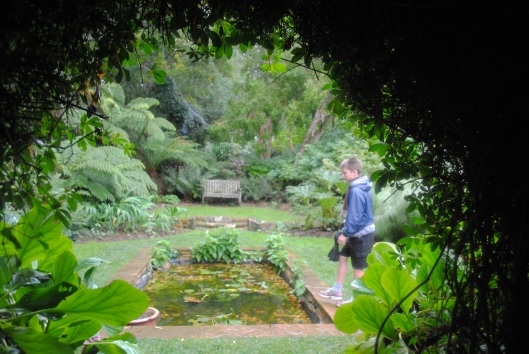 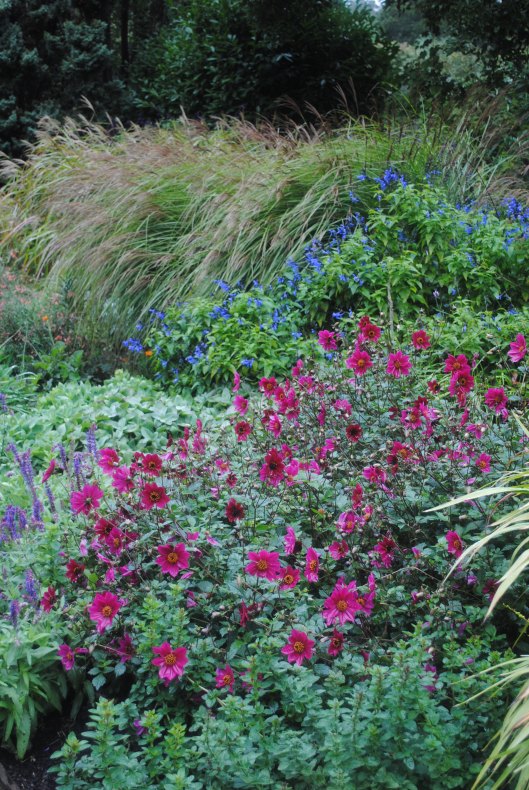 I hope I’ve done some justice to how sublime St Erth is. For me, it was a rejuvenation in the art of gardening. My painting continues, come hell or high water.

2 thoughts on “Some Enchanted Day – The Garden Of St Erth”