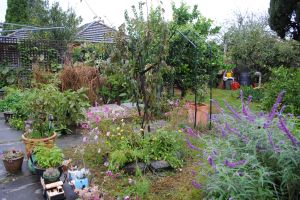 For a while now I’ve been pondering how best to approach the ominous vision of the future cast by the latest IPCC report. Let’s just say, most ‘thinking’ people already had a fairly bleak picture of the years to come and the report merely confirmed their suspicions – the world is heading towards imminent and irreversible climactic change, making it impossible for humans to continue to ‘inhabit’ the earth in any great numbers, and certainly not in the way we currently do. Not such a bad thing, for the planet at least. Yet for individuals, particularly those who have fought the good fight, it’s a difficult moment in human history. Give up the fight? Travel? Indulge ourselves, or press on, in hope that some miracle might present itself? Given the unlikelihood of the latter, I’ve decided to take the Alcoholics Anonymous approach to climate change … that is, one day at a time.

In the colder parts of the northern hemisphere a collective wish is being muttered under the collective breath – please, could spring arrive soon, please. Following the big freeze that was much of the north’s experience of this winter past, pictures of blossom, crocus and green sprouting things are crowding Twitter and Facebook – a sign of people’s relief I guess. Here on the other hand, in south eastern Australia, autumn seems to have become a thing of nostalgia. I can’t remember the last time we had anything like what you’d expect of autumn in Melbourne; perhaps it was about six years ago, just before the drought ‘broke’. In fact, it’s more like ‘spring’ weather at the moment than was last spring’s weather. Confused? So are my plants, and I don’t think they’re alone. 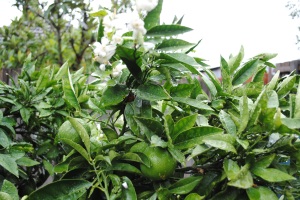 Today, as it’s been raining since late yesterday, gave me a moment to take stock of the garden. Over the past few weeks, with their oddly warm and humid days, I’ve been frantically plotting and planting the cool weather harvest. There’s been numerous visits to CERES Nursery and I’ve planted onions, lettuce, garlic, dill, chives and broccoli, and purchased pea and broad bean seeds. I’ve also started propagating kale from seeds collected from last year’s batch. Thing is, my garden is misbehaving. There’s no sign of my eggplant or cucumbers turning up their toes and gracefully retiring; I’m still waiting for pumpkin to ripen; and my orange tree has fruit and blossom at the same time. ‘Normally’ citrus trees flower in spring and we get ripe fruit in winter. ‘Normally’ I say, because I’m not usually a proponent of normality; it’s just that, in gardening, there are some relatively well-tested assumptions. Even these, it seems, must be cast aside to the winds of change. It’s kind of funny, if you can see the funny side of climate change, that Melbourne’s ‘April showers‘ are bringing ‘May flowers’. 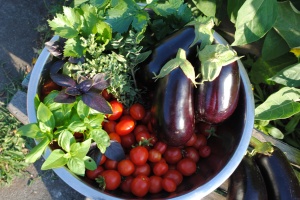 I have to admit that, on occasion, I’ve been known to see the plus side of excess carbon in the atmosphere. Green things love it, of course; we’re eating ‘summer’ vegetables way past their usual cut off point and plants are growing bigger and producing more fruit. After all, we’re dealing with a ‘greenhouse effect‘, which means precisely what it says. The down side is the extremes produced by an exponentially warming globe – the wild weather, the floods, the tsunamis, the polar vortex (that’s plural, by the way), the heatwaves, the earthquakes – aided and abetted by the mining and burning of fossil fuels, which is continuing apace, against our better judgement. A few years ago, when there still appeared to be some hope that we could avert the looming crisis, mitigating or adapting to excess carbon looked like something that was achievable. Now, I simply look at my mid ‘autumn’ garden and think, there’s no hurry dear things. Flower, fruit and blossom away to your hearts’ content. I can wait.

I’ve been adapting to a garden that has looked like it’s experiencing late spring or early summer for months; why force it into a preconceived notion of seasonal planting if it’s not ready for it? And it clearly isn’t.

I know that I advocated planning your garden in A Man, A Plan, A Canal, Panama, but I’m sure I said that *all plans were subject to change without notice. A season later, and a season wiser (if you could call it a ‘season’, in the traditional sense of the word), I’d be more likely to advocate that other superpower specific to folks who grow things – close observation of the conditions. Just because certain seedlings are appearing in the nurseries, or you’re feeling the slight panic that sets in once the light draws in, or because you’re almanac tells you so, or even because ‘tradition’ demands it, doesn’t mean that you have to dig up your cucumbers to make way for the cauliflower. As I said, one day at a time, and today it’s been raining, and raining a lot, and already I’m beginning to worry about my garlic getting wet feet. And snails eating my lettuce seedlings. Tomorrow, however, I’m leaving the garden to the elements and visiting The Diggers Garden at St Erth, come hell or high water. More than likely, at this rate, high water.

So, I’ll continue to marvel at the wonders of cosmos blooming (bottom) without pause for nearly five months, while my usual autumn floral back-up, the Japanese windflowers (top), start to show their delicate faces. One thing I’ve learnt, from this past turbulent year, is there’s actually nothing I can do, beyond what I’m doing, to alter the path the human species has set itself upon. It’s enough that my 12-year-old son alerts me to an ad on YouTube, proselytising on ‘LNG’ (read: CSG) as the ‘low carbon’ alternative to coal. That Max and I show equal amounts of disdain and horror at such propaganda means I’ve done an okay job in one part of my garden – the bit that Voltaire was referring to in Candide.

The title of this post popped into my head (as titles are wont to do) late this afternoon, as I watched the rain fall and gleefully squished snails under my sneakers. In the age of mis- or discredited memes, my academic training came to the fore, so I traced those three words to Alexander Pope‘s An Essay on Man. Spooky, indeed. Not only because of the subject matter, but because Voltaire said that Pope’s treatise was: ‘the most beautiful, the most useful, the most sublime didactic poem ever written in any language.’ And if anyone has bothered reading my early posts, you’ll know how Voltaire and gardens, and philosophy and democracy and science, and Charmian Clift and the communality of humanity, preoccupy my thoughts. Also, of course, I occasionally muse upon what Pope writes about below, which is the deadly imprint of ‘our’ vanity on the natural world.

Go, wondrous creature! mount where science guides,
Go, measure earth, weigh air, and state the tides;
Instruct the planets in what orbs to run,
Correct old time, and regulate the sun;
Go, soar with Plato to th’ empyreal sphere,
To the first good, first perfect, and first fair;
Or tread the mazy round his followers trod,
And quitting sense call imitating God;
As Eastern priests in giddy circles run,
And turn their heads to imitate the sun.
Go, teach Eternal Wisdom how to rule—
Then drop into thyself, and be a fool!