Sun-drying is about the easiest and best method of preserving tomatoes going around. I dry mine in a batch at a time, as I don’t have a very big drying rack. This ongoing process over the summer is aided by the fact that we seem to have a four day on/two or three day off cycle of heat at the moment. But for next summer I plan to develop a larger rack, using a fly-wire window, to increase the quantities of production. 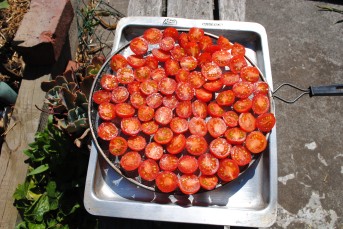 Day One: Slice the tomatoes in half and place them with insides up on a fine wire rack over a tray (this allows air to circulate underneath). Sprinkle the tomatoes with high quality sea salt and leave them in direct sunlight. I usually put them on a table or a bench and move them around throughout the day to maximise their sun exposure. Bring them in at night to avoid any condensation, which will slow the drying process.

I have a preference for using the Principessa Borghese tomato, which was bred specifically for sun-drying by the Borgheses. It’s a small, slightly plum-shaped tomato and, true to its purpose, it’s unbelievably good when sun-dried. Obviously any tomato variety can be used but the larger the fruit, the longer the drying process will take.

Day Two: Here are my babies at the end of two days in the sun, with the drying process well-established. The aim is to remove up to 90% of the moisture from the tomatoes. For semi-dried tomatoes, three days is probably enough, but you’ll need to store them in olive oil. Of course fully dried tomatoes can be stored this way as well, by re-hydrating them (see below) and adding herbs, chillis and garlic to the oil to taste. But I like to store them in an airtight jar, re-hydrating them throughout the year as required. This way they retain their intense flavour and freshness. That said, the oil from marinated tomatoes is fantastic and can be used in cooking once the tomatoes are all eaten.

Day Three/Four: By the end of four days of intense sun the tomatoes should be dry. I amalgamated days three and four because a wind picked up and I didn’t want to discover my now lightweight babies scattered across the garden. So they were out for half of Day Three and all of Day Four, which was a winner at 36 degrees with a blaring sun and a hot, dry breeze. I also turned them over across these two days to dry the undersides. You can test for dryness by eating one – they should be slightly crunchy and very chewy. And you’ll have the distinct pleasure of tasting something akin to … well, I actually don’t have words for it. Take a whiff of your tomatoes as they’re drying – that smell gets somewhere close to how amazing they will taste.

Once your tomatoes have reached a sufficient state of dryness, store them in an airtight jar or container. Re-hydrate your tomatoes before using them, by soaking them in water for 10 minutes or so, then drain. Once they’ve re-hydrated, you can marinate them in olive oil, fresh herbs, chillis and garlic. These can be used in a huge range of meals, from an antipasto to pizza, to pesto and pasta, and anything else you can come up with. I’d be interested in receiving inventive recipes that use sun-dried tomatoes, so feel free to send them in via Behind The Buzz.

Postcript: We’ve now made a bigger rack for drying tomatoes, using an off cut of fly-wire and some hardwood strips. I’ve covered a board with aluminum foil to provide reflection from underneath and I can now sun-dry tomatoes in quantities that will last us through the off-season.