Each summer we (amongst many others) make a pilgrimage to the south-west coast of Victoria, for a hearty dose of the ocean – for us there’s the particular charms of Skenes Creek Beachfront Caravan Park (where we pitch a couple of tents, eat, chat, read, swim and do very little else) – and of the Otway Ranges, which provide the spectacular backdrop to this part of the world and are perhaps one of the most famous and well-loved national parks in Australia.

A couple of years ago, on a day that started out overcast and a bit chill, we decided to follow the signs up Wild Dog Creek Road, which veers to the right up through the hills, just before you hit Apollo Bay. First to the Goats of Gaia to stock up on the best goats’ milk soap I’ve come across, then on to Otway Herbs. I couldn’t count how many times I’ve passed these signs over the years, thinking we should turn off to explore. Finally we took the plunge and, as a result, an annual ritual was established. Even the kids express delight when we tell them that we’re heading out today, up Wild Dog Creek Road, to the goats and the garden. And now we’re sort of recognised as ‘regulars’ by the proprietors of the above mentioned destinations, at least on a yearly basis, which is nice. The conversations we have seem to continue on from the previous visit, making the intervening 364 days, with all their ups and downs, not so important in the scheme of things. 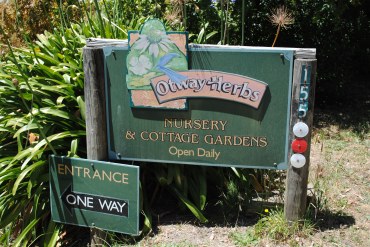 The first year that we stumbled upon Otway Herbs the visit was poorly timed. We were filling in a coldish, greyish day, when there was little to draw us to the beach. We’d already walked around the rocks a few times – we needed something to do. I say ‘poorly timed’ because, of course, I bought some plants and we were only a few days into the holiday. This meant I had to keep my precious little ones alive during a hot spell, and then get them back to Melbourne and nurture them through a super hot spell, before finally planting them out. I lost a couple, but at least three survived and are still doing well. Now, we leave the visit until just before we (reluctantly) head back to the city, meaning a better attrition rate for my seedlings. We’ve also discovered that it’s good to visit the garden on a sunny day, as there’s a particular magic to the place at the height of summer, with the hum of bees and crickets, and the unbelievable views across the hills, framed in a display of flowering cottage and companion plants, roses, fruit trees, vegetables and natives. 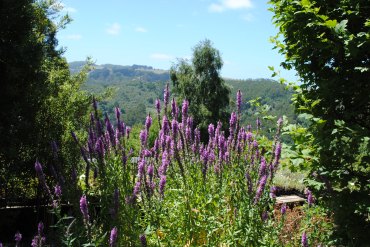 Judi and her partner Ken have owned the property for 40 years, and the garden and nursery have been running for 30. This explains the feeling of both solidity and wildness about the place – the garden meanders down the north facing hillside along terraces that feel like they’ve been there forever. As you walk through the garden you’re enveloped by overgrown, scented tunnels and glades; turning a corner you discover a nook or a vista that you realise you’ve never come across before, and possibly a blue-tongue basking in the sun. And, like most gardens, it changes every year. 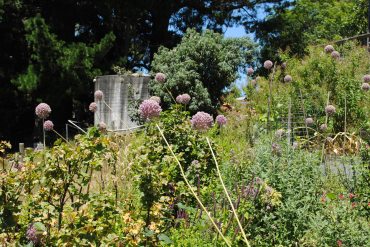 On arrival, first thing, I headed to the open-ended shed where Judi carries out her commerce – to assure myself that some of her homegrown, homemade blackberry jam was still available. Phew, two jars. So I quickly put dibs on one, although in hindsight, as it’s already half eaten, I should have been greedy and taken both. It’s the best darn blackberry jam I’ve ever had, which is why it disappears so quickly (next year, two jars, or possibly more). Judi also sells bags of her dried herbs and other herbal products, along with the vast range of plants she propagates from the garden – perennials, herbs, coastal plants, salvias, roses, shrubs, trees, ground covers, succulents and alpine plants. 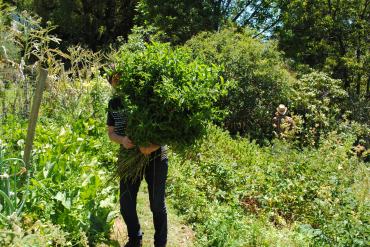 When you arrive at Otway Herbs, Judi is invariably busy in the garden somewhere, her hat appearing through the riot of greens and colour. There’s an exchange of comments on the weather and the year’s growing conditions, some discussion of the small grass fire we all witnessed a week ago, caused by a lightning strike to a hilltop just above Wild Dog Creek Road. This year I stumbled across Judi as she was picking the mint for drying, before it fell victim to the late January/February heat. As usual we talked about gardening and for the first time I told her about my garden here in Thornbury; how my dear friend Bridget had struggled through four days over 40 degrees in a row, keeping my vegies alive and productive through the blistering heat. In the parts of the Otways that abut the Great Ocean Road, a day of 40 plus degrees is a rarity, thankfully. Even when the temperature reaches into the high 30s or touches 40, there’s usually a coolish change towards afternoon. And of course, there’s always the deep blue sea, which, during this particular heat wave, was like a cold, clear rejuvenating lagoon. 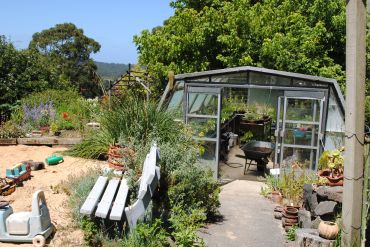 Facing north and running down the side of a hill, Judi’s garden is ideally placed, largely protected from the southerlies and sou’westerlies that can crop up at any time – in any season – and from the salt air, which is not all that good for most non-indigenous plants. The area is also one of relatively high rainfall (I say relative, as even the Otways – much of which is temperate rainforest – have experienced periods of severe drought over the past 20 or so years). The terraced nature of the garden is perfect for irrigation – little precious rainwater would go to waste here. So, although we visit in late summer, the garden is always a lush green oasis, particularly as you meander towards the bottom, where it becomes wilder, damper and cooler. 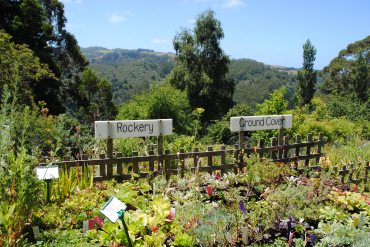 So, here’s the view from the nursery, with a mind-blowing selection of unusual plants, all propagated by Judi. Be warned – she speaks in Latin names, species and genus rolling off her tongue like a first language. Being a thoroughly common name soul myself, and drawn to plants for their function (for food or as companions), I’m in awe of this encyclopedic knowledge of the plant world. As we make our purchases – a couple of salvias, a medicinal herb, a few ground covers, the blackberry jam – I boast that I’d managed to propagate two clary sage plants from the one I bought from Judi two years ago. She actually is impressed, saying she’d missed gathering the seeds from hers and subsequently didn’t have any. I filed this away. Maybe I can repatriate some seeds, after my clary sage flowers this coming spring. 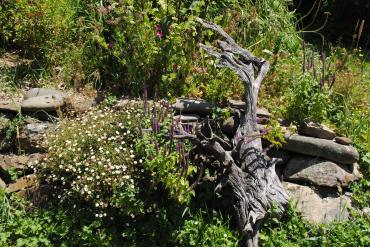 It’s difficult to convey just how beautiful Judi’s garden is, and how essential to our annual process of R&R it has become. I know I said I’m a food production gal, but in reality, and as those who’ve been reading this blog for awhile would know, it is the conjunction of form and function that preoccupies most gardeners, myself included. I’ve also wondered in a previous post – do non-gardeners visit gardens? Do they get the same delight from other people’s gardens that gardeners do? Well, neither of my kids are gardeners (in fact, they’re active non-participants in the main, apart from when I haul them in to help out); Stefan (the handy guy) isn’t a gardener as such, although he has now ventured in to growing chillies en masse. And yet kids, Stefan and dog alike encounter some kind of primal joy in our wanderings through this garden. It’s something you can hold in your mind and in your senses as a sort of talisman against the inevitable stress of the year to come. 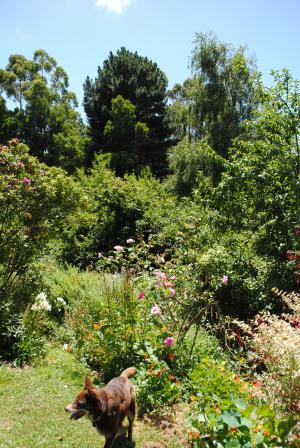 I wanted to mention something that hovers like a dark cloud over the Otways – fracking. For those who value this part of the world as much as I do, or for those who simply value our earth, the threat posed by fracking to the Otways is almost unimaginable. Currently Lakes Oil (that’s Gina Rinehart by the way) holds two exploration licenses over parts of the Otway Ranges. These have been granted by the Victorian Government, who are ostensibly seen to be ‘opposing’ fracking at this time. Don’t be fooled. If the Napthine Government are re-elected, the moratorium will be lifted. Why continue to hand out licenses for exploration across the State if this wasn’t the case? Coincidentally enough, there’s a meeting in Apollo Bay tonight to oppose fracking in the region, with a screening of Fractured Country, the documentary produced by the Lock The Gate Alliance that highlights the devastation the mining industry has wrought across Queensland and NSW. I wish I could be at this meeting. I guess I am in spirit. 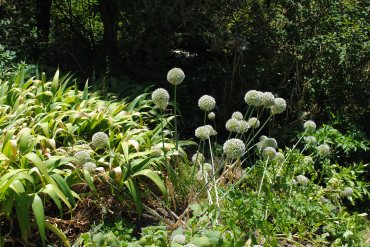 My point is, there’s a lot of us city folk, whether from the major cities or from regional areas, who take our time out each year in places like the Otways, along the Great Ocean Road, or perhaps you head the other way, down to Gippsland. And these places are singularly important to us, for their restorative powers – rainforest, ocean, gardens, farmers markets and local produce. I find it hard to conceive of driving down the road from Moriac to Skenes Creek, passing gas wells and mines along the way. Already I spied Lock the Gate signs in Deans Marsh – they’re elsewhere too I’m sure. But it’s not just farmland under threat – ‘our’ national parks and state forests are going to be subject to mining, CSG in particular, and, as has been evidenced from the NSW experience, the so-called protective overlay of these places is not much more than a token gesture. 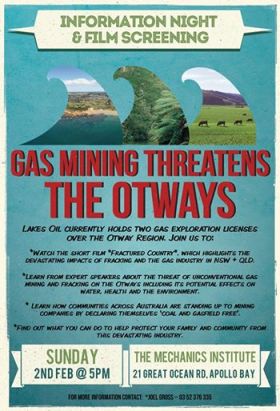 Seriously people, fracking is not something we can dismiss as ‘out of sight, out of mind’ any more. It should never have been somebody else’s problem in the first place, but it’s now coming to a seaside town or national park near you. Links need to be made between our energy use in the cities and the pleasure we take from our summer sojourns. The former, unless we start changing what we consume and how, may have very direct impacts on the forests we walk through, the water we drink and/or swim in, the food we eat and the beauty of the landscape through which we travel.

I hope Judi doesn’t mind that I’ve used her garden as a launching pad for a diatribe against fracking. Somehow I suspect she won’t. This year I want to visit in autumn and in spring, as much as I want a further dose of Skenes Creek and the ocean before the cold sets in. I’d also like to track the seasonal changes in Judi’s garden, something you don’t notice as much in your own garden, actively involved in those changes as you are. Also, I’d like to buy some plants at a time when keeping them alive before planting doesn’t involve heartbreak. 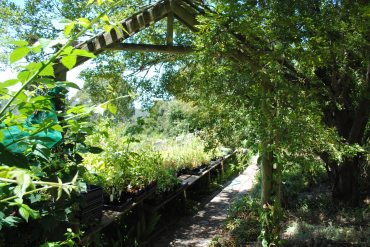 If you get the opportunity, take a left off the Great Ocean Road as you head west towards Apollo Bay, up Wild Dog Creek Road (a beautiful drive in its own right); pop into Goats of Gaia for some soap and a chat, then just a bit further along, turn right into Busty Road, then right into Biddles Road. At the top of the hill is Otway Herbs. Say ‘hi’ to Judi from me. Oh, and if you visit in about a month’s time, this year’s batch of blackberry jam should be available. 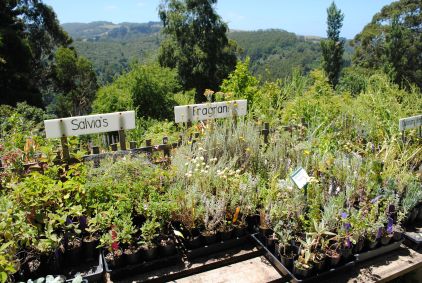