Always, at this time of year, I find myself getting impatient, although I love a winter garden, particularly these last couple of winters, when we’ve had rain, as everything is green and lush. It’s all so still, hovering on the edge of its imminent potential.

But, by now, there’s not much to do except wait. Wait for the winter veges, planted a couple of months ago, to come into edible being; for the seeds in the hot house to sprout and grow to a size ready for planting out; for the spring bulbs and irises to flower. Even the grass is looking after itself and we’re waiting for the right time to mow.

So, while I’m waiting, I thought I’d start this blog, which has been rumbling around in my head while my hands are covered in dirt for a long time. When friends drop over, I’m usually in the garden. If it’s raining or too cold, and I’m not in the garden, then I’m not really happy. I like to share what for me is the equivalent of a painting, or many, many different paintings. A garden is always an aesthetic pursuit, as much as it is a practical one at the same time. The combination of form and function has been a preoccupation of much of the last two centuries. To create a garden, you need to sit in it, watch the fall of light and shade, the angle of the sun, and follow the different lines of perspective, trying to imagine what something will look like in a few months time.

This garden began in winter, so it’s appropriate that I start this blog now. We moved into this house in May 2011, and the garden (that which set my sights on getting this house) was a mess. Within a couple of months we were eating food from the garden and the old fruit trees were coming back to life. It doesn’t take long.

The garden not long after we’d moved in, with the new vegetable garden beds in place.

No one had looked after this garden for a while, so envisaging what it could look like took a bit of work. The kids pitched in (or I made them) and dug up an old bed that was already in place, but was full of weeds and mint that had gone rabid. (My kids look so much younger in this photo, only two years ago.)

Where we began: the side bed along the fence, facing west.

I realised recently that I have been gardening for 25 years, building a garden in every rental house I’ve lived in, even those with only a square of concrete. Over the years I’ve accumulated a lot of know-how, along with a few disappointments here and there. More on these at some other time.

This garden, on the beautiful Thornbury street of Shaftesbury Parade, is without doubt the most fulfilling and the most productive. We have been eating from the garden almost exclusively for nearly two years; this year I am propagating from my own seeds so as to become completely self-sufficient.

So, back to winter, although a day like today is about as far from winter as you can get. A powerful northerly (as an Aquarian I have a deep dislike for the wind) and a temperature more like spring. The unpredictable nature of the seasons now makes gardening just a little more challenging, as many plants need the cold, or the right amount of rain (last year my peas failed, due to too much water. I saved the seeds from the ones that survived and have a great crop sprouting as we speak). But then, I expect that the seasons have always been a bit unpredictable in Australia, and at least, here in the south-east, we can grow food all year ’round. In many ways, that’s why I can’t live anywhere else. 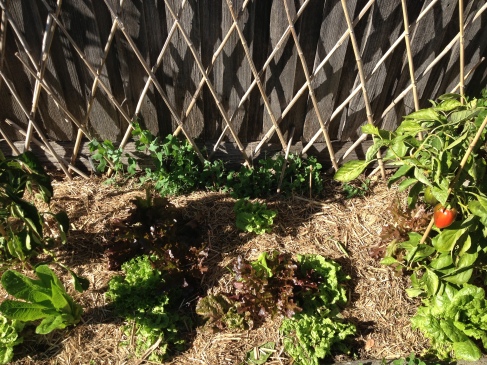 The west-facing fence (as above), with capsicums still turning red, peas beginning to climb the wall and some very happy lettuce.

Next time I’m sitting in the last of the winter sun for the day, with the yellow and orange calendula still and stark against all the green, I’ll take a photo and post it here. Today, I want winter back (apparently it’s on its way for the weekend) so I can take in the hush and the chill, and enjoy the waiting, knowing that just a few months down the track everything will have burst into life.

(While I sat here, writing this, that darn northerly blew over my hot house, strewing weeks of work all over the ground. That’s one of those disappointments I was talking about – a big one. So now, my next blog topic has been decided for me: propagation. Stay tuned, because now is the time to plan and plant your seeds for spring and summer.)

Postscript: I thought I’d better add a postscript to today’s (inaugural) post, given the drama played out in the natural, and the garden, world today. First, as recounted above, we had strong northerlies (warm winds) and hot sun for the first few hours of the day, during which my new hothouse blew over and undid weeks of propagation. Yes, I got a bit stressed by that. Then, an even stronger south-easterly and thunder, then buckets of rain, then a sun shower with a double rainbow (see below). Now, it’s kind of still and dark and grey, and everything around here looks very, very green.

6 thoughts on “The Waiting Game”