This is an article I wrote a couple of years ago, published in Australian & New Zealand Timberman (and that’s another story, for some other time). I’m publishing it here, lengthy as it is, as a precursor to an up-coming post. Somebody out there might find it interesting …

Amongst the hype surrounding the emergence of the Masters Home Improvement centres, and their direct challenge to Bunnings’ dominance of this lucrative market, there has been little said about the impact of these ‘big box’ retailers on the other hardware buying groups (Mitre 10, Home Hardware and Timber, etc) or, perhaps more importantly, on the smaller independent businesses in the sector. Much of the focus has been on the benefits to consumers of a challenge to Bunnings’ share of the market — in other words, cheaper home hardware/DIY products, increased choice, and the potential for a diverse range of services.

But what is really going on behind the rhetoric of increased consumer choice? Let’s, for a moment, look at the web of ownership of the major retail outlets in Australia. Wesfarmers, for instance, is the largest private employer in Australia, with over 200,000 employees. Since acquiring the Coles Group in 2007, Wesfarmers now owns a vast array of retail outlets — Bunnings Warehouse, Coles Supermarkets, Bi-Lo, Pick ‘n Pay Hypermarket, Coles Express, Coles Central, Liquorland, Vintage Cellars, 1st Choice Liquor Superstore, Officeworks, Officeworks BusinessDirect, Harris Technology, Kmart, Kmart Tyre & Auto Service, Target, Pharmacy Direct and HouseWorks. Wesfarmers Energy division owns a number of large mining and gas operations, and their Industrial & Safety Division “operates from a network of 241 branches supported by large distribution centres, hundreds of external and internal sales resources as well as e-business, websites and telemarketing channels”. And then there’s Wesfarmer’s insurance wing, which owns a lengthy list of predominantly rural insurance companies and brokers, both here and in New Zealand. 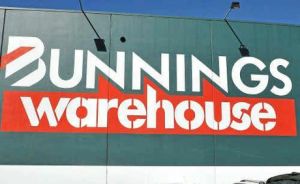 In 2009 Woolies made the leap into hardware with the takeover of the Danks hardware distribution group by Carboxy Pty Ltd, a joint venture between Woolworths and US home hardware megalith, Lowes. A holding company, Hydrox, was formed to house Carboxy in Australia, with Woolies owning two-thirds and Lowes the remaining third. And this is where the Woolworths hardware saga becomes quite complex and demands some close attention.

Danks has traditionally distributed to 1500 independent retailers, including, amongst others, Thrifty-Link and Home Timber & Hardware. In acquiring Danks in a joint venture with Lowes, and as part of Woolies’ push into the $24 billion hardware/home improvement retail market (what we now know will take the form of 150 Masters stores by 2014), Carboxy Pty Ltd is effectively both wholesaler and retailer and will be distributing to independent operators who are in direct competition with Masters, its retail wing. In fact the ACCC only approved the Danks takeover in light of undertakings by Woolworths that there would be no price discrimination against their independent competitors (whom they are supplying). However, as Associate Professor Frank Zumbo from the University of NSW, an expert in competition law, commented at the time, the undertakings were fairly wishy-washy:  “[T]here is nothing stopping Woolworths from giving their joint venture store a better price than those independents that Woolworths will supply. If they give those joint venture stores a better price, those independent hardware stores will not be able to compete as vigorously as they would otherwise have been able to compete.”

This less than cheerful view of events is in stark contrast to the general impression that Woolworths’ entry into the market is good for competition, and thus good for consumers. An article from the Sydney Morning Herald (at the time of the Danks takeover in 2009) quotes Woolworths chief executive Michael Luscombe as saying, “We’re interested in adding choice to the industry and we believe we can improve the pricing, product range and experience for customers.” A more realistic view is that Masters is setting itself up in opposition to Bunnings, and to Bunnings alone. And the picture that then emerges is not a very pretty one — the hardware/home improvement market dominated by two players, one of whom, at least, has control of a large portion of the supply chain as well, in the form of Danks (note that Wesfarmers also owns a number of hardware and related manufacturing companies). And these are two players who already have their big fingers in nearly every other retail market in the country. More and more this looks and feels like anti-competitiveness.

I spoke to Frank Zumbo about his thoughts on the matter, now that the Masters stores have become a reality. He agreed that a duopoly has emerged in the Australian retail market and that this did not bode well for either consumers or for the timber and hardware industry: “At first they’ll have special offers and gimmicks that will look like a good deal, but these costs will be passed on elsewhere.” And when you own the majority of hardware stores, petrol stations, liquor outlets and supermarkets across the country, it’s relatively easy to cross-subsidise ‘special offers’. So what may appear on first glance to be ‘competitive pricing’ actually represents a reduction in consumer choice and an overall rise in prices: “It’s what they did to supermarket food; it’s what they did to petrol. They are doing the same thing to the hardware/home improvement industry in Australia,” says Frank Zumbo. And while this has an obvious impact on consumers it will have a similarly disturbing and long-term effect on the local timber and hardware industry.

As the competition is reduced to a price war between Masters and Bunnings, and as smaller independent hardware and timber retailers get out of the industry because they simply cannot compete, independent timber processers and suppliers will be at the whim of Wesfarmers and Woolworths. And as Wesfarmers and Woolworths are first and foremost about the bottom line for their shareholders, it’s more than likely they will be chasing the cheaper import over the locally processed and/or supplied timber product. As Frank points out, this has already occurred in Coles and Woolworths: “They import an enormous amount of their food now, because it is cheaper.”

An article in The Herald-Sun from May 2011 outlines the projected financial impact on retailers in the sector. The ‘big box’ retailers (basically, Bunnings and Masters) have a projected growth in sales to 2020 from $6.5 billion to $11.5 billion (up 78%); the hardware buying groups’ (such as Mitre-10 and Home Timber & Hardware) share of the market profits will stay the same at $6.5 billion; while the most damning figure is for the independents — the ‘mum and dad’ sized businesses — with a 25% drop in profit from $14.2 to $10.6 billion. Madison Cross Corporate Advisory analyst Geoff Dart is quoted in the article as saying, “I expect there to be a price war. Bunnings aren’t going to lie down. They are not going to make it easy for competitors.” Dart predicts that 7000 independent operators will disappear in the next nine years and concludes, against the grain of the hype, that Masters will not grow the market, rather “they will gain market share from smaller players”. In fact, the prediction is that Bunnings and Masters will, within a short period of time, dominate 80% of the hardware retail market.

Eat or be eaten

There’s no doubt that this pressure has been getting to the smaller players for a while now. Colin Paine, owner/manager of the last of the Biz Buzz hardware outlets in Melbourne’s Essendon North, says he’s getting out of the business because he’s been in it for 40 years and needs a change. He agrees, however, that there is no future in independent hardware now; what was once considered a career simply doesn’t have the clear path and profitability to encourage people into it. Colin also acknowledges that the bottomless pit of advertising dollars available to the supermarkets and Bunnings makes it impossible to compete as a small independent retailer.

This fairly grim view of the future is echoed by David Israel of Toronto Wholesale Timber in Toronto (near Newcastle), NSW. Operating further along the supply chain, David has weathered the ups and downs of the timber industry for over 45 years, and has watched with grave concern as the big guys have slowly come to dominate the retail market. While we have arguably had a history in Australia of supporting smaller business owners over the large corporations, this seems to have gone out the window in recent times, and the Wesfarmers/Woolworths bandwagon rolls on. Why have Australian consumers become so complacent? David Israel doesn’t really have an answer: “I honestly think that a lot of people don’t really care; they’re not concerned; they don’t understand or they don’t want to understand … a lot of the time I think these big businesses hang up a shingle and they don’t have to post on the door which entity actually owns the business … personally I like to know who owns the business I’m shopping in, but a lot of people don’t seem to care.”

Remarking on the billion-dollar land grab that has been going on around Australia’s urban centres, by both Bunnings and Woolworths, David describes it as being “ … like a game of chess. That’s all they’re doing, is sitting in boardrooms around Australia playing chess. And we just happen to be the pawns in the whole thing and they’re just moving pieces into place, one against the other”.

So is there a way the industry can fight back, or is it endgame? David thinks “that the timber and hardware industry can hold its ground if the people in it can offer specialised services to the people who are looking for them … if people specialise in certain segments or niches of the market they should be able to control their entity. I know people in the paint industry who are small but who can compete because they give people specialist service and knowledge.” And this knowledge of your product and quality of service is perhaps the only way the small traders can fight back; there is little chance that Bunnings and Masters can be beaten at their own game, particularly as the big guys have trading laws and large stocks of employees on their side.

While Bunnings and Masters can afford to trade 12 hours a day, 363 days of the year, smaller traders simply can’t sustain such extended trading hours or employee numbers. But the pay off is, certainly with the experience of Bunnings, a lack of detailed knowledge and advice that the smaller, more specialised traders do provide. As David says, “People think that Bunnings are the answer to everything, but they’re not. They’re far from it, but they’re giving the impression to everybody that they are.” And it is this impression, drawing droves of customers to Bunnings every day, which is perhaps the most damaging aspect of their dominance of the market. People feel like they have no option but to shop at the big box hardware/DIY stores because they sell themselves as meeting every requirement, from plumbing to gardening to carpets and lighting, and more.

The fact is that consumers will often discover that the local timber or garden supply yard or paint shop, to name just a few, provides better service and a better quality product, and in the process they are supporting a small local business. As Frank Zumbo commented, “Consumers need to start paying more attention and being very wary of the claims regarding lower prices made by these big companies.” And the clear implication is, if we don’t start paying a bit more attention to who is snapping up the retail landscape, we’ll wake up and find ourselves with two companies owning and running the majority of the Australian economy. And that’s something that no one in the general public or the hardware and timber industry can afford to be complacent about.