The beet is the ancient ancestor of the autumn moon, bearded, buried, all but fossilized; the dark green sails of the grounded moon-boat stitched with veins of primordial plasma; the kite string that once connected the moon to the Earth now a muddy whisker drilling desperately for rubies.

From Jitterbug Perfume by Tom Robbins.

Until I began writing this post, I’d forgotten how often the beetroot appears in Tom Robbins’ wonderful epic novel, Jitterbug Perfume. As the Wikipedia entry on the book states, ‘Beets and the god Pan feature prominently’. There is, then, no need for me to wax lyrical on the beetroot; Tom has said everything there is to say, and more prosaically than I ever could. So what follows is a recipe for pickling beets, and yes, it has its own short story attached. But in the end, it’s all about the beet. As Tom Robbins says, ‘Beets are deadly serious.’ 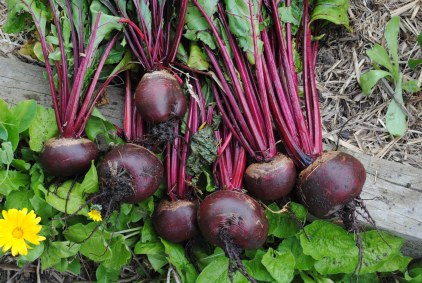 Not many people know that I’ve had a long-term vicarious love affair with Scandinavia. It was perhaps partially because of this that I ended up married to a Swedish-American in my early twenties. His mother was Swedish and his father was first generation Swedish-American. We ate a lot of Swedish food; he drove a boxy 1980s Volvo, which we christened the ‘Yellow Vulva’ (the fact that I now have an old Volvo of my own is of endless delight to me). When we visited his mother for Christmas in Minneapolis, we ate yellow pea & ham soup and pancakes on Christmas Eve and she gave us a raft of beautifully crafted Swedish knick-knacks, many of which I still have and cherish. She also gave me her recipe for Swedish Pickled Beets. And, although the marriage came to an end, the closest I’ve ever got to Scandinavia lives on in the jar of pickled beetroot that takes up residence on the shelf each year.

I always have beetroots in the garden – when one lot comes out, another goes in – so I get pretty excited when I have enough to pickle, all ready at the same time. The recipe says 3kg, but that’s a lot if you’re using homegrown, so I adapt the quantities accordingly. Also, I’ve transcribed the recipe as it was given to me, so it refers to a mysterious measurement – the decilitre. As I always forget to write on the recipe what this means, I find myself looking it up every year. It’s now seared in my brain, on account of this post, that a decilitre is a tenth of a litre (therefore 100ml), although why you would measure sugar in millilitres, I don’t know. Yet another intriguing aspect to the Swedes.

Chop the leaves off and give the beets a wash in cold water, removing any dirt. Keep a few centimetres of stalk and leave the roots attached, as this helps maintain both the colour and nutritional value of the beets when you cook them. 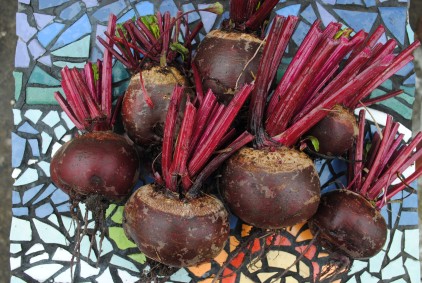 Cover the beets with water in a large pot, add the salt, and boil until cooked through; 20 – 30 minutes is usually enough, dependent on the size of the beets, as you don’t want them too soft. Once they’re cooked, drain and rinse in cold water and peel immediately. This is as easy as sliding the skin, roots and stalks off with your hands – no peeler necessary.

While the beets are cooking, make up the pickling solution by adding all the ingredients, except the horseradish, to a pot and bringing it to the boil. Add the beets (you might want to halve or quarter the larger ones) and bring the whole kit and caboodle (sic) to the boil, cooking the mixture for five minutes or so.

Once the beets have cooled a little, put them into clean jars and pour the pickling solution over to cover. Leave the lids off the jars for about 20 minutes, to allow the liquid to cool, then add the horseradish, stir through, and put the lids on, making sure they’re done up nice and tight. Leave the beets for two weeks or more before serving them up, to make the most of the pickling process.

As you can see, I use a very large jar. This is because I keep adding more beets and solution as my beetroots mature, so we have these amazing things at hand all summer and into autumn. Store the jar in a cool place away from direct sunlight and there’s no need to refrigerate once you’ve opened it – the brine does all the preserving tricks for you.

The horseradish is definitely the secret ingredient in these pickles – there’s something about the combination of that wily little root and its ‘grounded moon boat’ of a cousin that enters into the realm of ambrosia.

Writing this has inspired me to re-read Jitterbug Perfume – I expect it has something to say about this moment in our history. It’s also led me to some very interesting blogs on beets – their history, genus, amongst other things. If you’ve become even slightly intrigued as to why Tom Robbins might have figured the beet as a central character in his book, you’ll find lots more information about this ‘melancholic vegetable’ via the links below.