On March 11th in 2011 a massive earthquake off the coast of Japan triggered a tsunami that swept through the towns of Okuma and Futaba, irreparably damaging the Fukushima I Nuclear Power Plant (Fukushima Dai-ichi) and initiating a nuclear meltdown. Since that terrible day, over two years ago, high levels of radiation have leaked from Fukushima I into the surrounding area – the air, the groundwater and into the Pacific Ocean.

The implications of what is now considered the world’s worst nuclear disaster for ocean and human life in both the short and long-term have brought the vexed issue of nuclear power into the spotlight once again, and at a crucial moment in its sorry history. Nuclear power continues to surface as a viable and ‘safe’ alternative to fossil fuels, as unbelievable to the post-Three Mile Island/Chernobyl/Fukushima generations as that might seem.

The persistence of the nuclear power lobbyists in the age of climate change, with its attendant increase in major natural disasters, seems even more extraordinary. Yet, as with all such things, there are significant vested interests, not least in the mining and sale of uranium (Australia has two out of the six largest uranium-producing mines in the world – Ranger and Olympic Dam – and Fukushima was fueled by Australian uranium). These interests are the reason nuclear power continues to rear its ugly head, even though the effects of radiation on life on the planet are well-known and tragically evident from Hiroshima and Nagasaki, from the 2000 plus nuclear ‘tests’ carried out since World War 2, and from the ‘accidents’ at Three Mile Island onwards.

In August this year, TEPCO – the company that owns Fukushima – finally admitted that ‘between 20 trillion and 40 trillion becquerels (units of radioactivity representing decay per second) of radioactive tritium have leaked into the ocean since the disaster. The Fukushima plant is still leaking about 300 tons of radioactive water into the ocean every day’. It is predicted that the initial levels of leaked radiation will reach the US western coastline via Pacific Ocean currents by early 2014. However, the US is not alone. Given that the Pacific is the largest of the earth’s oceans, bordering dozens of countries and territories, the meltdown at Fukushima has implications for millions of people and ocean species. Scientists are already saying that the effect of the radiation on marine life is evident and warnings have been issued about consuming Pacific Ocean fish – a staple food source for many of the countries bordering the Pacific. 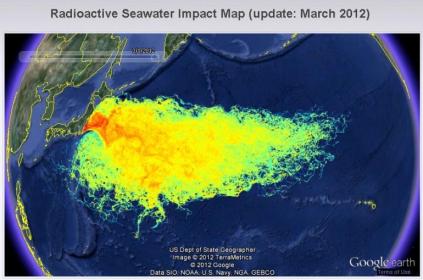 ‘One Ocean, One Chance, One Day to Turn the Tide’

‘Fukushima is Here’, on Saturday 19th October, is a global day of recognition of the ongoing threat posed by the radiation leaking from Fukushima I, a day to highlight the nonsensicality of nuclear power, and to show solidarity with the Japanese people. It is appropriate that those countries that share the Pacific Ocean are holding rallies on or near a beach, with Melbourne’s day of action taking place at St Kilda Beach.

This setting is poignant in light of the 1957 post-apocalyptic novel, On the Beach, by Nevil Shute, which takes place on an Australian beach, and which certainly had a profound effect on me as a young teen. Reading this book was probably the beginning of a lifetime’s dedication to the anti-nuclear cause. It is sad that a whole new generation is growing up in the shadow of a radioactive future, and that the world has not moved far from the trajectory initiated with The Manhattan Project.

The spectre of a nuclear future alongside climate change paints a very ugly picture for young people; one that is grim and without much hope. If anything, the ‘Fukushima is Here’ day of action represents the hope, ever-present in the anti-nuclear movement, that humans might have a slim chance of re-shaping the future for the better.

Visit the ‘Fukushima is Here’ website for information about events taking place around the world.

For information about the Melbourne day of action, visit the ‘Fukushima is Here’ Melbourne Facebook page.