dag /dæg/ (say dag) noun Colloquial 1. someone who dresses or behaves in an unfashionable or unstylish manner.

From the Macquarie Dictionary.

When I was at school, being a dag was … well, it was daggy. Abidingly, ‘though, the term has carried an element of endearment, even in its early forms. In other words, being a dag is not the worst thing on earth.

For those readers outside Australia, a dag (first and foremost) is the tangled mess of excreta and wool that hangs off a sheep’s butt. Immediately the original use of ‘dag’ as an insult becomes clear. But, over the years, and as is the way with words, calling someone a dag is now more of compliment; certainly this is the case in my world.

For the word ‘dag’ to carry any weight, it needs its opposite – the stylish and fashionable; the ultra-cool. And no one is any of these things – the words imply a striving to become, always trying to be something other. No one is born ‘cool’, for example, or fashionable. Nor do they ever become so, as it is always out of reach.

Anyway, to stray back on topic, arguably everyone is born a dag, in its colloquial sense. And then we spend (in the ‘West’, specifically) much of our time trying not to be a dag – rejecting our daggy selves. It was only when I was in my early 20s that I began to understand the power of the daggy, and to begin, gradually, to get in touch with my inner dag.

Needless to say, when I was a teenager, I thought gardening was daggy; also, my parents made me help out in the string of beautiful gardens that I was lucky enough to grow up in. I had to cut deadheads and move the wood pile, every summer.

So, when I moved out of home I rejected gardening; it didn’t even cross my mind for a few years. Just a few. And then, the gardening gene kicked in and before I knew it, I was starting a garden in every share house I moved into. I was lucky to have a few great gardens, which I hope I improved on just a bit. And slowly, at the same time, my knowledge of gardening accumulated, until now I am surprised at what comes out of my mouth. Growing vegetables would be my special subject on Mastermind.

Part of embracing your inner dag is called ‘growing up’; it’s about realising that the emphasis placed on being fashionable is also an emphasis on vacuity. I love dags; I always have but I didn’t realise, when I hung around with the (self-professed) ‘Dregs’ at school, that it was because I was drawn to the fact that they were just a bit closer to their selves. Have I just outed myself as a humanist? 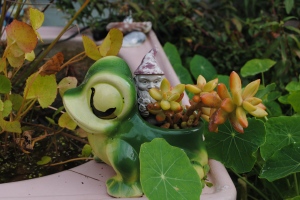 These days I hear ‘ya dag!’ used sparingly (it’s been overwhelmed by Americanisms). I want to bring it back in fashion (there’s an irony if there ever was one). I want my daughter to embrace her dag now, so she doesn’t waste her life trying to be cool. The times we laugh most together are when we are being completely daggy.

So if pottering around in the garden is daggy, so be it. In hindsight it is, at the scale of the species, truer to our selves to subsist and have some relationship with where the things we consume come from than to crave the latest fashion or to want to be something we are not.

Being a dag is, fundamentally, about trying to live without inhibitions or false desires; inhibitions that have been placed there by a 100 years of believing the self to be dual – both conscious and unconscious (and 100s of years of believing that money and objects make you happy). It is difficult, of course, to struggle out from so many years of enculturation and indoctrination. But neurological science is fast moving towards debunking this model of the self, which I think is a good thing. The unconscious is too much like God or Santa Claus – it can be or mean whatever you want.

Not that I think there is a absolute bias towards the biological – the recent shift in psychiatric diagnosis towards a biological explanation for all psychiatric disorders, and an extension of the category of disorder to ‘normal’ behaviours, is a case of passing the buck, quite literally. Obviously, and neurology is proving this, our cultural, social and economic context informs the wiring of our brains. There is, without doubt, an interweaving of the natural and cultural.

Problem is, what passes as culture has become so complex and compromised, many brains have become detached from the fact of their biology – what did Freud call this? Perhaps one of my academic friends could answer that. I’ve recently read it referred to as ‘mortality salience’ in The Antidote: Happiness for People Who Can’t Stand Positive Thinking by Oliver Burkeman.

To get back to dags, and I’m not quite sure how I got off them – being a dag is something to be celebrated; it means you don’t care what other people think about you, you’re just trying to be as close to your brain as possible, trying to nut it out, break the bad patterns, retrain it to think in different ways.

My friend Krysti was a dag, and I’m sure I put my arm around her and called her that, out of fondness, at some time over the years I knew her. Krysti tried to have no inhibitions, to live her life to the fullest, under often testing circumstances, and she tried to get as close to her true self as possible, even if what she saw there wasn’t all a bed of roses. Throughout all this she was very ‘cool’, and I looked up to her and loved her. Knowing Krysti, and hanging around with other like-minded people, was part of my learning curve towards a celebration of dag-dom, in all its forms.

1 thought on “Embracing Your Inner Dag”